I love Fogo de Chao’s parmesan pork. The other day I was surfing Pinterest and found a coypcat recipe. Last night we gave the recipe a shot!

We used this recipe.

The flavor of the pork was fantastic. The marinade seems a bit odd, but is so delicious. Some of the pieces turned out a bit dry, specifically the ones on the ends of our skewers and the smaller pieces. It suggests cutting the cubes as evenly as you can, but it’s a bit tough to do that since a pork loin isn’t traditionally square. All in all, definitely a recipe we will be using again. I think maybe next time we will try either cooking the loin whole and injecting some of the marinade or cutting it into medallions rather than small cubes to try to find  a balance between maximum flavor and maximum moisture.

A couple of changes, specifically to the parmesan part. I bought a block and grated it myself. The parmesan was pretty strong, and I didn’t use the full 5.3 oz block. I used about half of it, and it was plenty. I also didn’t leave it on the grill a full minute on both sides after adding the parmesan. I did on side for a minute and then just left it on the grill for a few seconds to get the cheese melty on the other, although the pork is still hot when you put it on, so that’s maybe not even necessary. 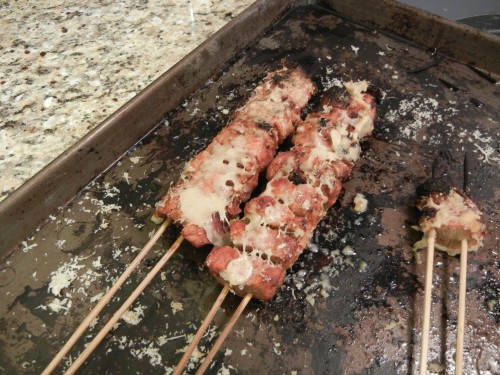 Addendum: As you can probably tell in the picture, my skewers got a little crispy. That’s because I forgot to soak them (and I just now realized this. A week later.). However, only the ends got crisped, so it didn’t really hurt anything. But next time, I’ll soak them first. 🙂