I have had my eyes open for some new lampshades or lamps for our bedroom for a while. We had one nice lamp and one lamp that was originally designed (by me) to be plugged into an outlet controlled by a light switch. There aren’t any of those in our room, so it was kind of awkward and the shade was always messed up. 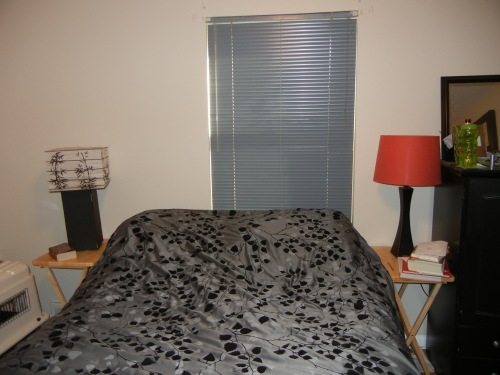 I decided to do some lamp shade shopping on Black Friday, because, honestly, I feel like most places want an arm and a leg for a lamp shade. It’s not uncommon to find a lampshade I like at Kohl’s or JcPenney’s website and the price tag is a whopping $45. For one. That kind of price is just not in the budget, so I decided, on a whim, to check on Lowe’s website, and hallelujah. They had several shades that I loved, that matched my room and that were in my budget, at $12 and $15 apiece. It said they had some in stock at the Lowe’s that is conveniently one block from my house, so I hit the showers and headed out. They had both shades I particularly liked, but they were drastically different sizes (something that is hard to know when looking at a website.) I threw both in my cart and hit the spray paint aisle. If I was going to buy these shades, why not go all the way? While I wasn’t opposed to the mismatched look, I happened to have two matched lamps anyway. 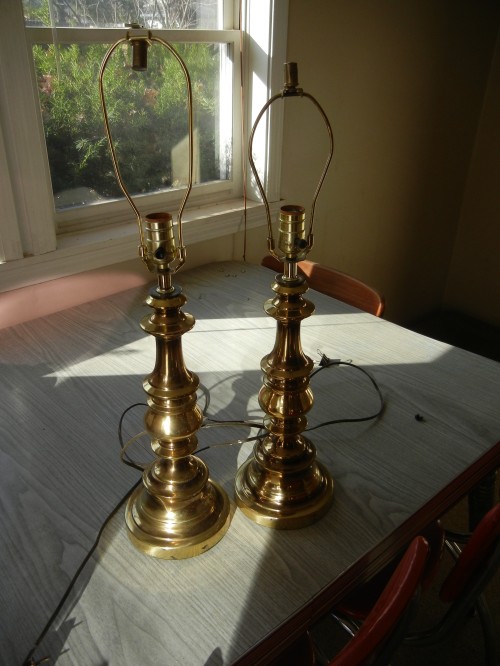 If these look familiar, it’s because they once upon a time lived in my mom’s living room.

The shade I bought didn’t need a harp (the wire thing that holds up a lampshade), so I took those off and threw them away. Could I have kept them, just in case I ever needed them again? Yes. Do I need to do that? No. Probably won’t need them, and if I do I can just buy some new ones.

I gave the lamps a good dusting and then took a piece of sandpaper to them, just to rough the surface up a bit for the spray paint (per the spray paint can’s request.) Two quick coats later, and I had these lovely little lamps. 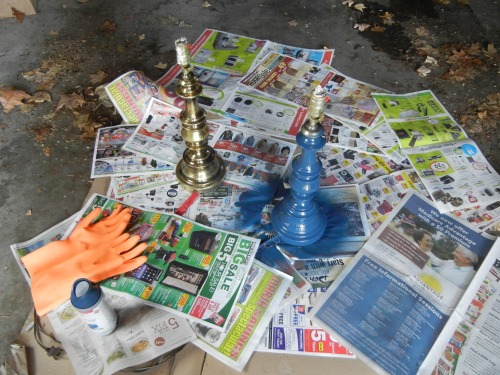 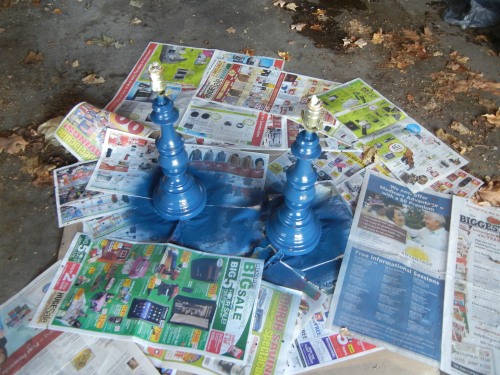 Per the spray paint can’s request, I let them sit for about an hour (the can only wanted 45 minutes, but I wanted to appease it so I gave it a little bit of extra time in the garage). They were dry to the touch, so I moved them to the porch and the Great Lampshade Decision began.

I loved this pattern, and kind of liked the slim look they gave the lamps: 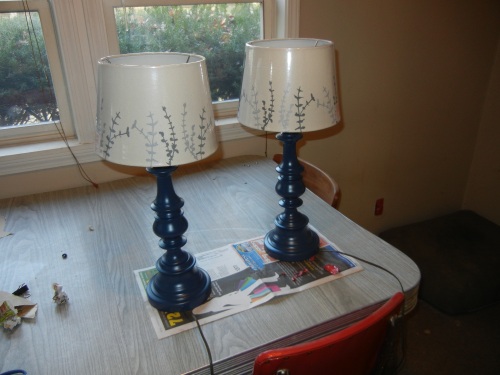 But wondered if they were big enough. 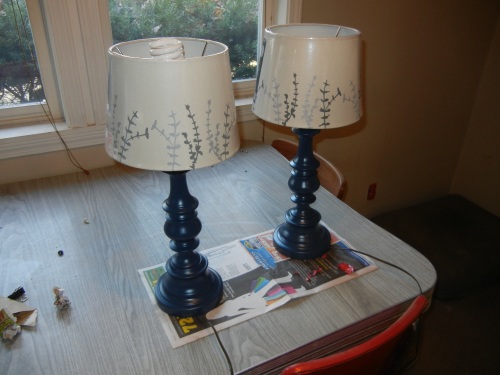 Looks like a no. See how the light bulb sticks above the shade? I thought about getting a smaller bulb, but they are our reading lamps and I wanted to make sure they were plenty bright. 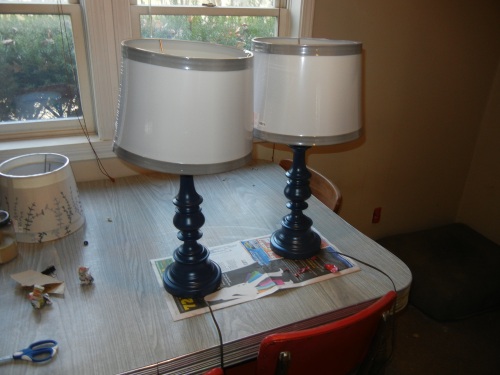 Bigger shades! I didn’t like these quite as much, but as much as I tried to believe otherwise, the other ones were too small. 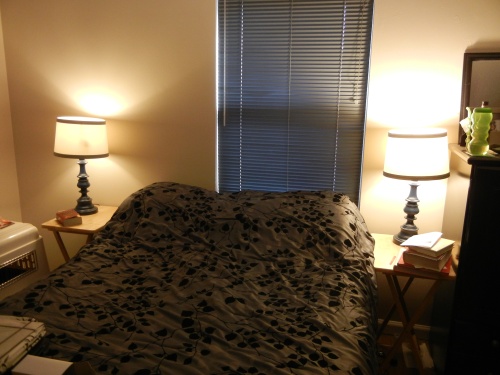 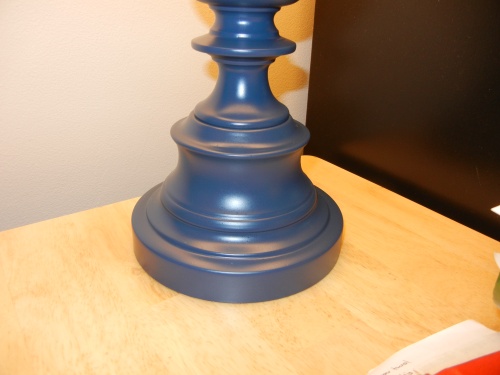 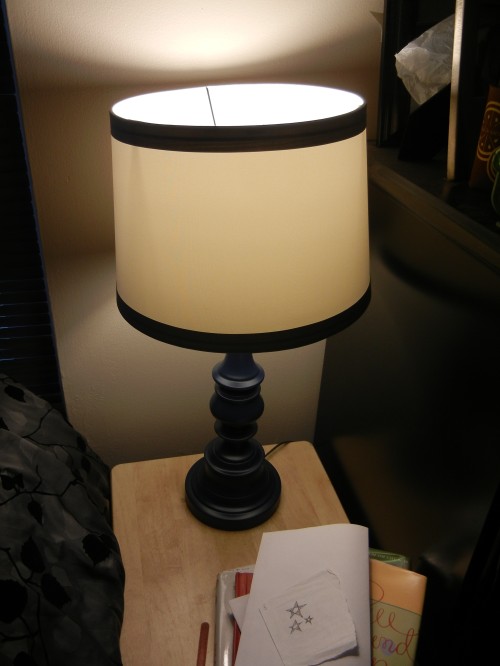 Maybe that’s too many photos for a simple spray paint job, but I was pretty proud of them.

Total time: 3 hours (includes trip to Lowe’s, sanding, spray painting and dry-to-the-touch time. For good measure I let them sit on the porch for about 12 hours, but it was only 3 hours of being engaged in the project.)

Already had the lightbulbs and sandpaper.

(I didn’t find this on pinterest, though I imagine there are similar upgrades)

If you have not yet discovered Pinterest.com, let me give you a quick rundown. Pinterest is an online bulletin board, where people attach links to things they love. It varies from pictures of attractive men to instructions for ingenious DIY children’s Halloween costumes. What you find there changes with the season and the closest holiday, and I love it. You can spend an hour there, you can spend 30 seconds there and you will be entertained either way. Some people choose to simply browse, other take a more proactive role and pin things they find there or add their own from the expanses of the internet. I am somewhere in the middle. I have several cork boards, including a knitting one, a food one, a home organization one and a home inspiration one. While I frequently repin things I find there, I rarely create my own. I haven’t a clue why I do it that way, it’s just the way I prefer. Another beauty of pinterest. Be as involved as you want to be.

I pin and pin and pin, and yet I have to actually make one of the projects from Pinterest. Granted, some things I won’t be able to accomplish until I actually own a house, but a lot of them don’t have any such caveats. So I’m setting myself a challenge. This Christmas season, I am going to make some of those pins a reality.

Now, I won’t pretend like I think I can make 25 crafts in December, because I would definitely get behind, so my goal is going to be 15. Also, they will not all be Christmas projects, because I just think I would get a little tired of that and then I would have to put all of my heard work away in January. Budget will be a big factor, with an emphasis on reusing and recycling things I already have. Also, I am just going to start now. There’s the challenge with some fast and loose rules.

And, while we’re at it, if anyone wants to join me in this challenge, please do! Comment on this post with your goal for number of projects and any other rules you’ve set for yourself, and I’ll feature you and your projects on the blog!

For a few years now, I have made a tradition of making homemade apple butter each fall.

This year’s batch turned out especially delicious, so I thought I’d share the recipe with you all. The recipe is from a canning kit I got Paul for his birthday a couple years ago, with a slight modification.

First things first, we upgraded this year from a paring knife to this lovely contraption… 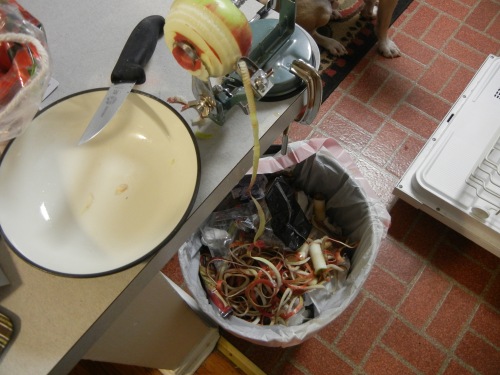 For $25, we peeled and cored 5 lbs of apples in less than 30 minutes. Worth the investment? I think so! It can also peel potatoes. Mashed potatoes, anyone? 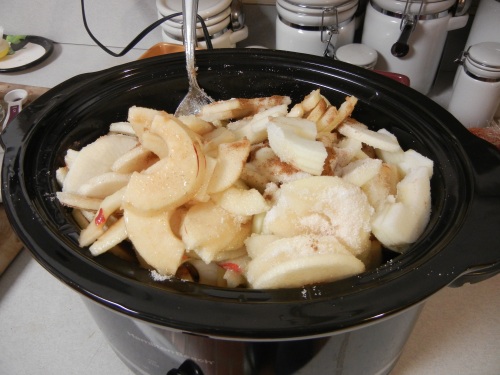 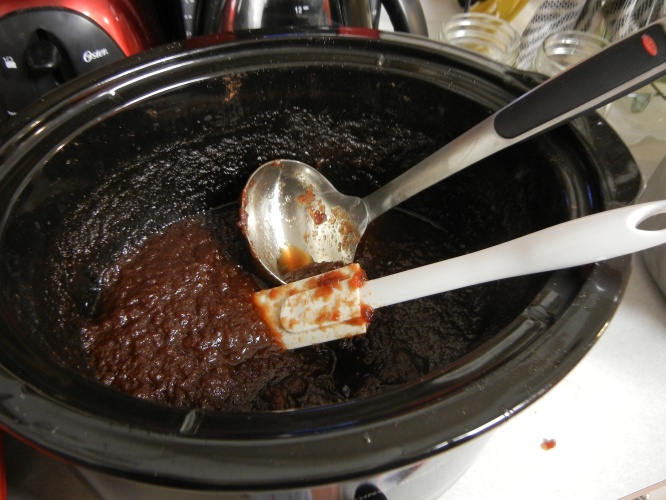 Then Paul put it in jars. 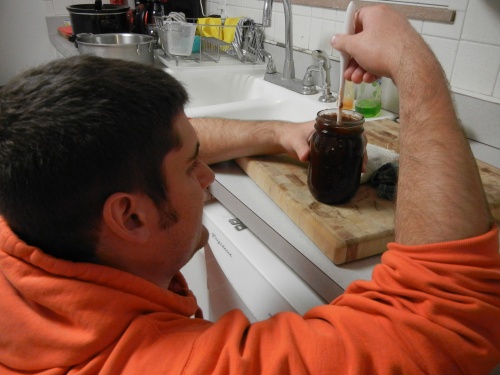 And we canned them! 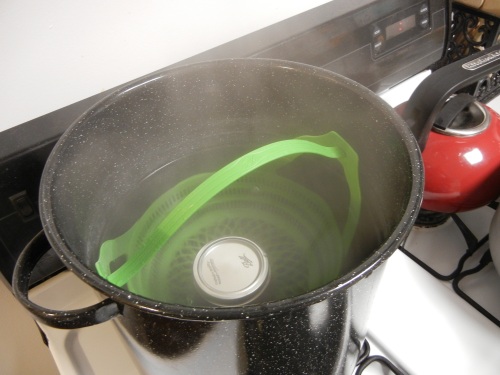 They all canned properly, which was really exciting for it being both of our first attempt.

5 lbs. of apples, peeled and cored

1 cup of apple cider (We used apple cider purchased at the orchard where we got the apples. We chose their option without preservatives)

The recipe called for cooking it really hard several times, but I opted for the slow cooked method. I put it in the crock pot for 1 hour on high and then about 11 hours on low. Time can be adjusted based on how thick and dark you want it to be.

Some other fall highlights in our household: 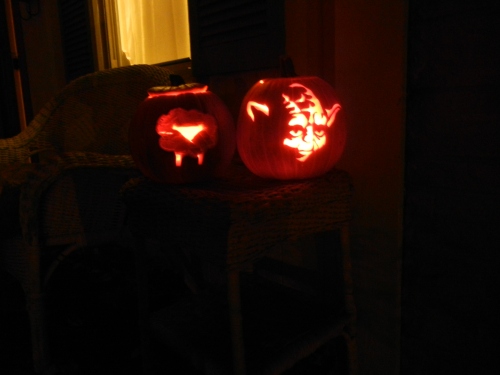 Our Jack o'Lanterns - Paul carves Yoda and I carved the sheep 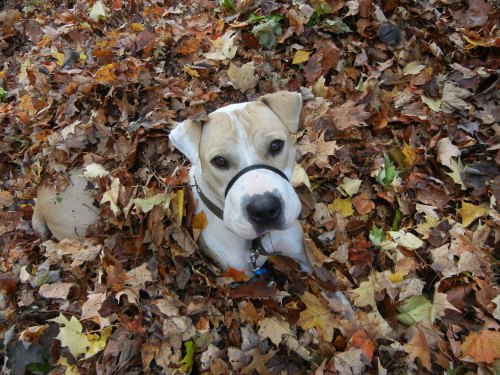 Tucker loves the leaves! (Because people have asked before what is on his nose, I thought I'd mention that he isn't wearing a muzzle. It's called a gentle leader, and makes it easier to control him when he is on a leash. It also keeps him from choking himself out, which is good. Apparently a mother dog would gently bite her puppy on the nose when he is misbehaving, so this device sort of mimcs that. I highly recommend it if you have a dog who wants to go a million miles an hour on the leash, like Tucker. It doesn't inhibit his ability to bark, eat, drink or pant. Sometimes Tucker has a little trouble with the panting due to the combination of his massive cheeks and the gentle leader, but if that is the case we just take a quick break from the gentle leader so he can cool down.)